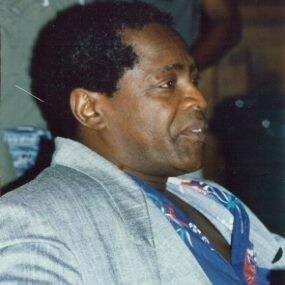 Please share a memory of Willie to include in a keepsake book for family and friends.
View Tribute Book

Willie B. Mavins Jr., affectionately known as “Taters”, 79 passed away on Friday morning, September 24th 2021 in Syracuse, New York.  Born in Orangeburg, South Carolina, he was the son of Willie B. Mavins Sr. and Ola Irons. Willie was a soul/blues singer, songwriter, and self-taught guitarist best known for his original songs “Hey You”, “Greedy Man” and “I Can’t Sleep”. He also made his living as an architectural drafter, painter, and flooring contractor. Willie was a solo artist but during his music career he was also the lead singer in a Central New York band called “Quick Change”. In 2013, his musical talent earned him a Sammy Hall of Fame Award. He will be remembered for his selflessness, hard work, wisdom, wit, infectious laugh, genuine spirit, and his charming smile. He is survived by his former wife Lorraine F. Mavins, their sons Justin Mavins, Benjamin Mavins, Aaron Mavins and six grandchildren. He also leaves behind his sisters Aleane Moss, Delores Haney, Lillian Mims, Ola Stokes, Willie Dean Julia Felton, and Betty Moseley. He was predeceased by his brothers Henry Mavins, Alexander Mavins, Eugene Mavins, Levorn Mavins, Robert Mavins, and his sister Rosa Bogar. The funeral service was held Friday at Morningside Chapel in Oakwood Cemetery followed by burial.

To send flowers to the family or plant a tree in memory of Willie Mavins Jr, please visit Tribute Store

Look inside to read what others have shared
Family and friends are coming together online to create a special keepsake. Every memory left on the online obituary will be automatically included in this book.
View Tribute Book
Services for Willie Mavins Jr
There are no events scheduled. You can still show your support by sending flowers directly to the family, or planting a memorial tree in memory of Willie Mavins Jr.
Visit the Tribute Store