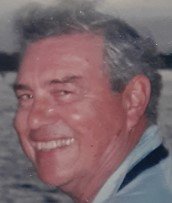 Charles “Chuck” J. Ciaccio, 95, passed peacefully on April 26, 2021 at St. Joseph’s Hospital in Syracuse, NY. Mr. Ciaccio was born October 22, 1925 in Huntington, Long Island and raised in Brooklyn. After graduation from Franklin K. Lane High School in Brooklyn he served in the Navy during World War II. After active service at the Naval Hospital in Pearl Harbor, he attended Hobart College, receiving a B.A. in 1948. He then went on to New York University earning an M.A. in 1949, and continued with extensive post graduate studies at SUNY.

In 1949 Chuck was married to the love of his life, Prudence Clemishire, a love affair that would span 72 years. Following their marriage, the Ciaccio’s moved to Camden, NY where Chuck had accepted a position as a Social Studies teacher. In 1953 he took a teaching position at Altamont High School and transitioned to Guilderland High School where he remained for the next 30 years in various capacities.  He retired in 1983 as Principal, a position he held for 23 years.

Chuck was active in volunteer community service, serving as President of the Suburban Scholastic Council School Administrators Association of N.Y.S., President of the Helderberg Kiwanis Club, member of the board of Albany Children’s and Family Services, Editorial Board member of the School Administrators Association of N.Y.S., Editorial Consultant for the N.Y.S. Museum, Educational Consultant for the N.Y.S. Dept. of Education and serving as the Vestry-Warden of St. Boniface Episcopal Church in Guilderland for 20 years.  He also volunteered at the Guilderland YMCA, Guilderland Meals on Wheels, Friends of the Library and the Guilderland Food Pantry.

In 1960 the Ciaccio’s purchased a house in Altamont, the one and only home they would ever buy. Chuck and Prudy raised their family there along with a host of their children’s friends who were constantly in and out of the Lincoln Avenue home for lunch or dinner or just to hang around.

In March, 2020, as a result of COVID and the untimely death of their son Craig, they moved to the Syracuse area to be closer to their daughter Karen and her husband, Dave.

Chuck is predeceased by his parents John and Mary; his brothers John Jr. and Dominic; his son Craig and his grandson Charles lll. He is survived by his wife, Prudy; son, Charles Jr. (Kathy) of Wachapreague, VA; daughter, Karen (David) of Syracuse, N.Y; his four grandchildren, John, Josh, Matt and Katy (Noah); and his three great granddaughters.

A celebration of life will be scheduled in the summer.  Should you wish, donations in Chuck’s honor may be made to the American Heart Association  or Alzheimer's Association.

Always ready with a quick smile, a hug and a kiss, Chuck was a quiet, dignified and gracious man.  He will be sorely missed.

To send flowers to the family or plant a tree in memory of Charles Ciaccio, please visit Tribute Store

Look inside to read what others have shared
Family and friends are coming together online to create a special keepsake. Every memory left on the online obituary will be automatically included in this book.
View Tribute Book
Services for Charles Ciaccio
There are no events scheduled. You can still show your support by sending flowers directly to the family, or planting a memorial tree in memory of Charles Ciaccio.
Visit the Tribute Store