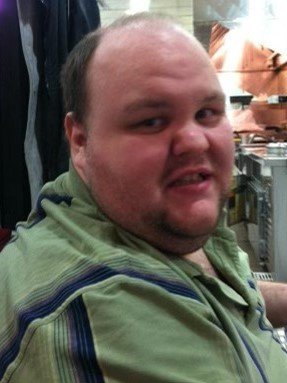 Please share a memory of Thomas to include in a keepsake book for family and friends.
View Tribute Book

Born in Syracuse to Theresa Wolfe and Robert Lee on June 23, 1985..TJ was a graduate of Nottingham High School.

TJ was a kind hearted, head strong young man.  He knew who he liked and what he liked and that was it. Rarely being convinced otherwise.

He often created little skits with friends and individualized for each person. Requiring them to answer back with scripted phrases made by him. Then repeat these scenarios over and over again.

He loved all cultures and taught himself to say hello and goodbye in many languages. Often surprising people at various cultural festivals. He never wanted to travel to these places. Probably because he was afraid his mom would make him go camping.  It's happened. He loathed anything that took him away from internet and cable tv. He knew the capitals of most countries, ..even when he couldn't pronounce them. He also knew the capitals and most populist cities of each state. He did visit Alaska twice and Florida once....not by choice. He liked Alaska but hated Disney World. Go figure

He enjoyed music from the he 80's and older, knew who sang, the year released and the record label that recorded the song. Much the same with movies.

He socialized mostly at Syracuse Polish Home where he found acceptance, patience, kindness, and many friendships.

Though he didn't adventure much, he lived exactly  as he wanted. taking care of his mom, eating at local restaurants and drive thru's, playing on his computer and arguing with friends over which is better, Coke or Pepsi.

Celebration of life to be held after our current health crisis is over. In lieu of flowers, please wear a mask and think of others during these difficult times. TJ did.

Memorial donations may be made " In Memory of TJ" to the Syracuse Polish Community Foundation Inc 915 Park Avenue Syracuse, New York 13204.

To send flowers to the family or plant a tree in memory of Thomas Wolfe, please visit Tribute Store

Look inside to read what others have shared
Family and friends are coming together online to create a special keepsake. Every memory left on the online obituary will be automatically included in this book.
View Tribute Book
Services for Thomas Wolfe
There are no events scheduled. You can still show your support by sending flowers directly to the family, or planting a memorial tree in memory of Thomas Wolfe.
Visit the Tribute Store