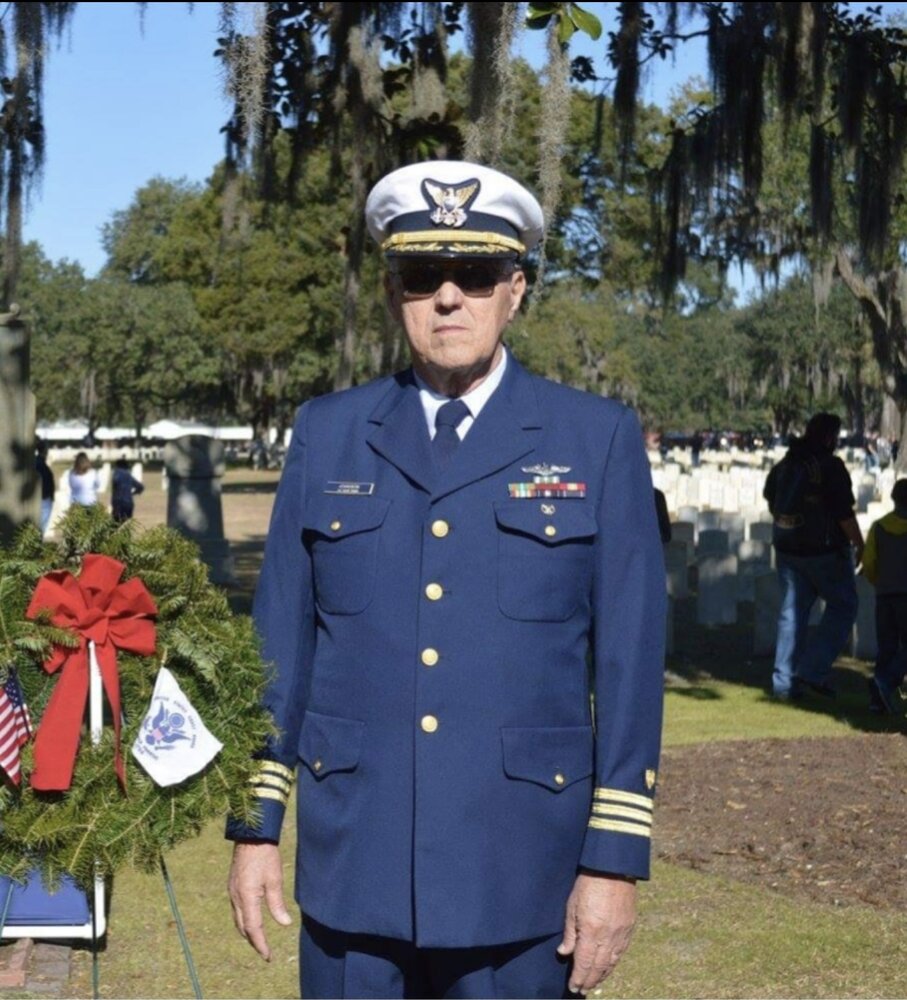 Please share a memory of Cmdr. Kenneth to include in a keepsake book for family and friends.
View Tribute Book

Commander Kenneth Iver Johnson, United States Coast Guard (Retired),  of Clayton, New York and Ladson, South Carolina passed into the arms of his Heavenly Father on Friday, July 1, 2022 at the age of 81.

Ken is survived by his wife of over 55 years, Cynthia, his son Eric (Meggan), his daughters Sonya and Sandra (Kory), his sister Mary, 10 grandchildren, a great grandson, and many extended family members. Ken was a loving husband, father, grandfather, uncle, and friend to everyone he met.

Ken was born on March 31, 1941 in Duluth, Minnesota and raised in nearby Two Harbors where he spent many of his days fishing on the shores of Lake Superior. He grew up spending his summers on Isle Royale with his family of commercial fishermen (and women). His love of the water, boating, and fishing was something instilled at a very young age, and was a defining feature of Ken’s life.

In 1959, Ken began his military career in the United States Navy where he served on nuclear submarines until his discharge November 28, 1966, a mere five days before his wedding.

After his Naval service, Ken went to the Baptist College at Charleston (now Charleston Southern University) completing his Bachelor of Science in Math and Accounting with a minor in Physics in 1969. He later went on to complete his Masters in Business Management from University of Minnesota at Duluth in 1980.

Ken continued his military service as an Officer in the United States Coast Guard from December 18, 1970  until his retirement September 1, 1989. During his time in the Coast Guard, Ken completed two tours in Alaska (Seward and Kodiak), one tour in Seattle, Washington, one tour in Alexandria Bay, New York, and two tours in Duluth, Minnesota with his final tour as Commander of the Marine Safety Unit in Duluth.

After his retirement from the Coast Guard, Ken returned to the Thousand Islands in New York and began Great Lakes Marine Consultants, conducting surveys on boats of all kinds.  He also taught the OUPV (“6-Pack”) licensing course for many years. In addition to his surveying business, Ken spent several years as Captain of the Victorian Empress with St. Lawrence Cruise Lines. He was also, for a time, joint owner of  American Metalcraft Marine.and R J Marine Associates LTD. He was a well known fixture at the Koffee Kove in Clayton, spending time having coffee and talking with friends.

In addition, Ken was a devoted member of the First Baptist Church of Clayton (now River Community Church) where he served as a deacon for many years, and participated in multiple mission trips to Mexico, building homes and ministering to the men, women, and children he met while there. He also was dedicated to Wreaths Across America Day at the Beaufort National Cemetery, Beaufort, South Carolina in honor of fallen veterans, participating faithfully since 2012.

In 2012, Ken and his wife became snowbirds, spending their summers on the St Lawrence River and winters in South Carolina to be close to family. He continued to do the work he loved on the river he loved until his final days.

Ken was known to family and friends for his kindness, his ready smile, and steadfastness. His strong faith meant family and friends were dear to him and he took the time to check in with those he cared about no matter the distance that separated them. He was known as a second father to many of his children’s friends, the “funcle” to many of his nieces and nephews, and faithful friend to many more.

His love and devotion to his family, his church, his friends, and most importantly his Lord and Savior is a testimony in itself. The amount of love and joy Ken gave to those he knew is an immeasurable gift, and while we mourn the loss of a great man here on this earth, we also celebrate in the knowledge that Ken has been welcomed into the arms of his heavenly Father with the words “welcome home, my good and faithful servant.”

A celebration of his life will be held at River Community Church, 38844 Bartlett Point Road, Clayton, New York 13624 on Sunday, July 10th at 2:00 PM. Services will also be held in South Carolina where he will be laid to final rest at Beaufort National Cemetery with dates to be determined.

Ken’s family would like to thank Hollis Funeral Home for their kind and gracious service in our time of sorrow.

In lieu of flowers, please consider sponsoring a wreath for Wreaths Across America Day at https://www.wreathsacrossamerica.org/remember-honor-teach/#remember or Save the River at https://www.savetheriver.org/donate/

To send flowers to the family or plant a tree in memory of Cmdr. Kenneth Johnson, please visit Tribute Store

A Memorial Tree was planted for Cmdr. Kenneth
We are deeply sorry for your loss ~ the staff at Hollis Funeral Home
Join in honoring their life - plant a memorial tree
Online Memory & Photo Sharing Event
Online Event
About this Event

Look inside to read what others have shared
Family and friends are coming together online to create a special keepsake. Every memory left on the online obituary will be automatically included in this book.
View Tribute Book
Services for Cmdr. Kenneth Johnson
There are no events scheduled. You can still show your support by sending flowers directly to the family, or planting a memorial tree in memory of Cmdr. Kenneth Johnson.
Visit the Tribute Store