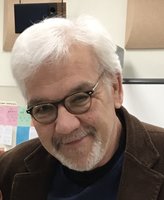 Thaddeus “Ted” Nazarkiewicz, 67, of Syracuse, NY, passed away on September 30, 2020, at home surrounded by his loving family.

Born in Syracuse, he was the son of Otto and Leokadia (Tatarski) Nazarkiewicz.  Ted graduated from Sacred Heart High School and SUNY Morrisville.  He was employed at Fay’s Drugs/Rite Aid for 45 years, retiring in 2015.

Ted was a communicant of Holy Family Church.  He enjoyed landscaping, walking, record/CD collecting, and spending time with his family and friends.  Although he loved all music, Ted will be remembered most for being The Beatles No. 1 fan!  Ted will be greatly missed by all who knew him.

Calling hours will be held at Hollis Funeral Home, 1105 W. Genesee St., Syracuse, on Monday, October 5, from 4-5:30.  In lieu of flowers, donations may be made to St. Judes Childrens’ Hospital or to Hospice of CNY.