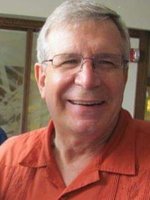 Paul Robert Darnell passed away at Crouse Hospital in Syracuse, NY on Saturday,

Landon and Jean Darnell and raised in Newfane, NY. He graduated from Wilson

Central School, class of 1964, and received a BA from Harper College (SUNY

Binghamton). Paul continued on to seminary at Boston University (Th.M.), and years later, Chicago Theological Seminary (DMin). He completed his residency at the Pastoral Psychotherapy Institute.  Rev. Dr. Paul served as a local pastor for the United Methodist Church in Edwards, South Edwards, Oswagatchie, and Hamilton, NY. Paul worked as a

psychotherapist and pastoral counselor at the Onondaga Pastoral Counseling Center and as a chaplain at Hutchings Psychiatric Center until he retired in 2012. He became a licensed mental health counselor in NYS and set up a private practice which he continued until his death. In his free time Paul enjoyed reading, crossword puzzles, birdwatching, and gardening. Paul is survived by his wife of 52 years Anita, his son Nathan, his sister Linda Baehr (Robert), his brother Gary (Tammy), his nephew Brandon (Tara) and their children Mari and Claire. The family is requesting in lieu of flowers, donations  be made on behalf of Paul to the International​ Society for the Study  of Trauma and Dissociation​ (ISSTD) and the MPN Research foundation (myelofibrosis

research). As per Paul’s wishes, his body has been donated to Upstate Medical

University. Arrangements have been made by Hollis Funeral Home and a memorial service will be held at a later date.